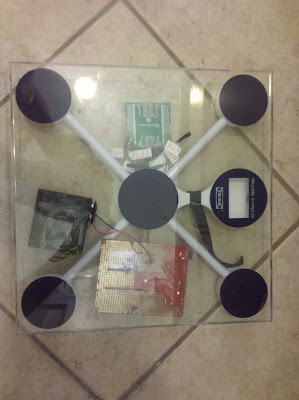 Not exactly a keyboard, but I'd argue that a datalogging scale is an imput device... In any case, this is a project I did a while ago (~2 years ago). Start with a cheap bathroom scale from ikea, then strip out all the hardware except for the load cells. Add in the following: 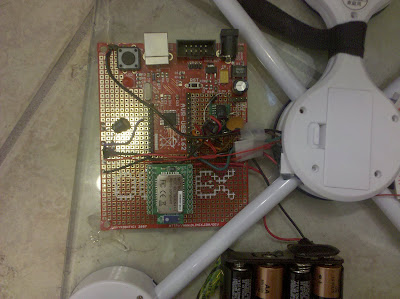 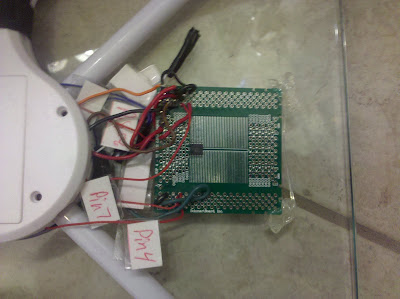 After assembling the above hardware, the microcontroller code was fairly straightforward- when a user taps a corner of the scale I take repeated ADC readings until the "running STD" (STD of last N measurements) drops below a certain threshold. At this point the scale will have a stable zero point to normalize the subsequent weighing. When the user stands on the scale I do the same thing- take ADC readings till STD< threshold. I chose the threshold such that the delay before convergence was short, at the expense of some accuracy. Left to run long enough the scale was able to detect the difference between my bodyweight and my bodyweight plus one US quarter. With the current threshold the scale appears to be repeatably accurate to within 0.1 lbs which for my purposes is acceptable. I was actually pretty happy to get that level of performance considering I didn't lay out a board for the ADC and just used a schmartboard instead.

One other metric I was happy about is the battery life - approximately > 9 months when used once or twice a day. I coded things such that the microcontroller is in a deep sleep until the user touches a corner of the scale. I could have taken a hardware approach and actually disconnected the uC power with a transistor until the user touched the scale, thus arming a delay circuit, but the software approach yielded more than acceptable results. The uC current draw is in the microamp range when sleeping and I use transistors to disconnect power from the bluetooth module and ADC while sleeping so I probably shouldn't have been surprised.
I think for a future revision of this project I'll actually spin my own main board. This would allow for a much more compact footprint and allow me to power from a smaller 3.3V source instead of the stack of 4 AAs. This latter arrangement was needed to avoid extensive rework of the olimex board where certain bits of hardware expect 5V.

On the PC side of this project I'm using bluez rfcomm server to listen for inbound serial connections and then run some other code when a connection is established. That other code consists of python scripts that insert the current reading in a sqlite database (which is then visible from my ruby-on-rails site) and submits the reading to fatsecret via its API. This data submission is done using OAuth, so the whole process requires no human intervention and I avoid any ugly hacks involving plaintext saved passwords.

Fatsecret is great because:
(1) it has an API
(2) it has an android version
(3) it can scan barcodes to fetch associated calories and nutritional content
Here's a screenshot from my phone showing a graph of weight readings for the last few months. 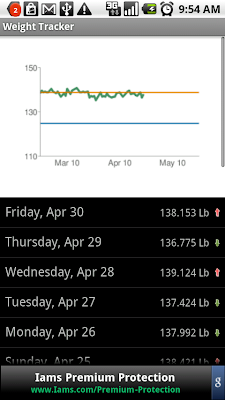 One final aspect of the scale which I find interesting is the means by which the user interacts with it. I intentionally made it so that scale does not have an LCD to show the current weight reading. Day to day fluctuations are not reflective of what really matters- long term trends. Usage of the scale thus boils down to the following:
(1) User taps lower corner of scale to initiate auto-zero sequence
(2) The scale turns on its sole LED to indicate that the zero process is ongoing
(3) The scale switches its status LED from solid red to blinking to indicate the zero process is complete.
(4) User stands on scale until LED turns off, indicating the reading has stabilized.
(5) User reviews cumulative weighing data at some later time (either via phone, or at their PC)

For fun, I added an additional means of relaying data to the user- spoken weights. By feeding the stabilized weight reading to festival (text to speech engine), the scale can "announce" the most recent weighing.
Posted by trtg at 9:56 AM