As I hinted at in an earlier post, the magic trackpad hardware is very well designed and bears a strong resemblance to the Fingerworks series of input devices. Now, I've decided to extend the functionality of this device by building a wireless multitouch keyboard using two magic trackpads. Currently, this keyboard will only work in linux since it relies on my extensive modifications to the linux kernel driver for the magic trackpad.

The first image above shows my two magic trackpads with plastic overlays to indicate key placement. It turns out the magic trackpad will still detect contact through a thin insulator placed on top of its surface. The overlays are simply standard laser-printable overhead projector transparencies. I originally considered laser etching the surface of the trackpads at TechShop, but I think I will hold off until I've settled on a key arrangement that I like. Here's a picture showing how I originally planned to lay out the keys relative to my hand. 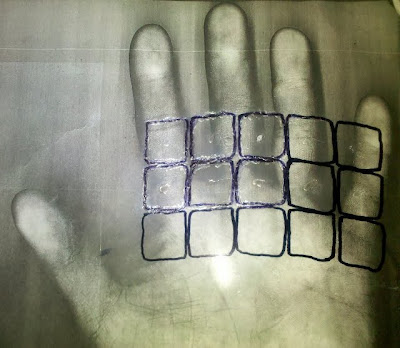 For now, I opted against the layout above in order to simplify the code that converts coordinates to keycodes. The layout I'm currently using consists simply of three concentric circles, so the code simply checks which circles contain the current touch to determine the corresponding "row" and then compares the X coordinate to a table of thresholds to determine the "column". I created the layout seen in the other pictures using Illustrator. I'll post links to PDFs for the left and right halves in case anyone feels like trying this out.

The keyboard was intended to be placed on the lap to minimize elbow flexion. To hold the halves together I used two strips of rubberized truck tarp (very strong stuff used for a windsurfing roof rack). I'm still working out how to make this attachment adjustable without being bulky.

The transparent blobs seen on the home row of the keyboard in the previous images is clear nail polish. A few coats of this allowed creating a raised ridge to facilitate finding the home row while touch typing. This is actually the principal drawback of a multitouch keyboard- the inherent lack of tactile feedback. The nail polish helps somewhat, but I'm still thinking of other ways to mitigate this issue. The image below shows the nail polish blobs close up. 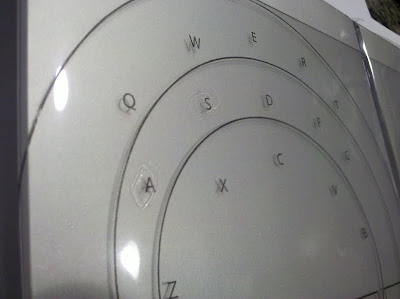 I currently have preliminary mixed typing/mousing support and a few simple gestures. I also implemented certain behaviors which I think make the use of a touchpad far more ergonomic:
(1)Moving the cursor and single clicking is done with two fingers rather than one.
This helps eliminate the annoyance of inadvertent cursor movement or clicks when a single finger alights on the trackpad. I also think it's more ergonomic, since for me using a single finger requires more effort than using two.
(2)Double clicking is done with a three finger tap- this eliminates the hassle of properly timing a double click.
(3)Scrolling is done with four fingers instead of two. This allows just plopping your entire hand down on the trackpad to scroll rather than contorting it to extend only two fingers.

Write a GUI to rearrange key placement which generates suitable header files based on user's choices. Perhaps eventually come up with a means to allow reconfiguration on the fly.

Hardware:
Come up with better attachment and adjustment system for the straps which connect the two halves of the keyboard 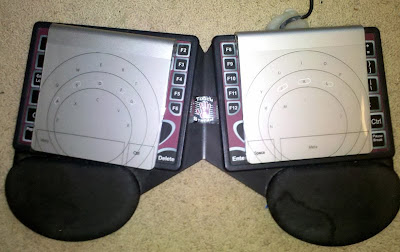 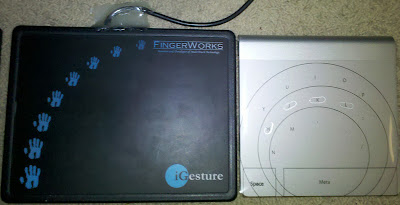